In search of the northernmost point on earth

If you have travelled the world and think you have seen majestic landscapes, a trip to the Arctic circle might well surpass your expectations as there is no other place on earth so humbling, so thought-provoking and so completely beautiful.

Heading to the “top of the World” is an unforgettable experience that changes us and the way we see the world. As you walk towards the North Pole you will be walking in fact on a moving ocean of ice. An ocean with floating monoliths and a palette of whites, blues and greys as far as the eye can see. It is a terrifyingly alien landscape that evokes the sublime. A white vastness that only sees a single sunrise and sunset every year that had fascinated explores and artists for centuries because of its extraordinary beauty.

Before taking you on this magnificent adventure to the wilderness of the Arctic on board of a luxurious superyacht we wanted to unveil a few of the reasons why you should look to the extreme north for your next vacation instead of flying, once more to a warm and idyllic beach where most of the people go.

Our adventure starts (at least for this article) on an archipelago everyone can call home: Svalbard.

Located in the Arctic Ocean, halfway between Norway and the North Pole, Svalbard is a cold heaven with untouched Arctic wilderness and fascinating wildlife in a rugged and fragile landscape.

Nearly two-thirds of the surface of Svalbard is protected and consists of several nature reserves, national parks, and bird sanctuaries. This makes it an incredible place on Earth with incredibly rich wildlife (a few thousand polar bears for example).

During the bright half of the year, when midnight sun can be seen nearly 24/7, the first thing you will see from the windows of your Jet is the archipelago’s beautiful snow-capped mountaintops before landing in the world’s northernmost airport. During the other half of the year, darkness reigns and often, the magical Northern Lights flicker and dance overhead.

Before boarding your superyacht and start your cruise, why not explore a bit the beauty of this archipelago in snow scooters before discovering how our favourite luxury water (from icebergs) is produced or/and dining in the world's northernmost sushi restaurant.

Onboard of a sumptuous private yacht of your choosing, we will start our cruise to explore Greenland, the Arctic Circle and the North Pole. A journey of wonders where one of the most rejuvenating feeling you will experience is an incredible peace and calm. Here, there is nothing more than eternity as time seems suspended.

East Greenland entices adventurous travellers to explore a wholly unfamiliar and utterly entrenching region of the world. A last vestige of pristine wilderness inaccessible to cruise ships and normal expeditions. It is an incredible region called the ‘Arctic Riviera” due to the beauty of its landscapes.

Here, we will be visiting the easter-coast of course but we will also take you by air where very few explores ever go: into Greenland’s mainland to discover the incredible landscapes untouched by men.

It will be also a first opportunity to see first handed a tragic reality: global warming.

As we explore Greenland’s east coast by sea, land and air, you will be able to witness how the ice, year after year melts, how what should be covered by ice now isn’t and how sometimes, within just half an hour, a block of ice the size of Manhattan break and then melt due to the constantly rising temperatures of the ocean.

There is something magical about seeing your first iceberg. The twisting and carved designs they form into, a steadfast uncertainty to their nature, they conjure an ancient feeling. They are majestic and make us feel all the power of nature and how small we are. Staring at these gentle giants is mesmerising. It is like seeing an incredible slow-motion ballet as your boat dances around them.

During the trip, you will surely quickly become an iceberg aficionado. It’s like discovering, over and over, something which is the same and yet completely different. You will be comparing them, always on the outlook for one that will be more magnificent than the last.

Many seem sculptured of marble, some seem ash-flecked, like fur, others can appear made of crystal; some are accretions of globular ice; still, others have the ragged, fractured and about to crumble. A few float at a tilt, showing bottoms grooved by the licking water; occasionally these will flip over and send out waves. Never are the icebergs more beautiful than when viewed in full sunlight; then they often glow from within. But you will probably also see them wrapped in mist.

And something you must experience is exploring a glacier. Although it can be challenging and, in some cases dangerous when not properly guided, the feeling of entering into those giants of ice and frozen snow over decades is something extraordinary and of rare beauty.

Extraordinary wildlife for the most instagramable trip ever.

Travelling to the Arctic is an exciting and memorable adventure that gets us out of our daily routine and can change our lives by experiencing the immensity of the most incredible landscapes on earth and by seeing first handed its incredible wildlife.

Being in this real wilderness makes you change by reconnecting with nature. Here animals simply arrive when they arrive. You can see a polar bear mother appearing with her playful cubs when you weren’t expecting them and then, feel there are nothing miles around.

Polar bears are of course the most famous Arctic inhabitants. When the ice melts in Svalbard or Greenland, Polar Bears spend more time onshore but they can be found also in the middle of the ice. Although they are majestic and incredibly cute, your guide will always be by your side as it is paramount to keep a safe distance and respect the right safety precautions when you are anywhere near them.

Another marvel of the Arctic is Walrus. These imposing creatures can grow up to weight more than 2000 kilograms and they like to relax on sunny beaches. The larger specimens live in Alaska and the east of Russia but you can see smaller species both in Svalbard and in Greenland.

Seals are also among the most beautiful species, especially Harp seal (and their adorable pups) living in Greenland, or the most common seal in the Arctic, the Ringed seal.

Swimming in the freezing waters in Northern Greenland and sometimes Svalbard, the mysterious and strange Narwhals are often called “the unicorns of the sea”. 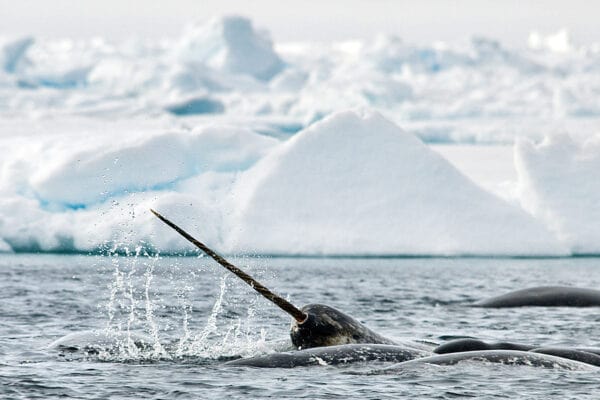 Although Humpback whales don’t live in the Arctic year-long, they’ll spend the summer months swimming in the Arctic Ocean and it’s truly something incredible than seeing them closely.

And of course, one of the most beautiful mammals on earth can also be found in the Arctic, usually in November and December.

Brutal but also sensitive and gentle, Orcas are simply magical and when on top of simply seeing them you can slip into the cold water and see this immense black-and-white shape coming towards you it is something simply extraordinary.

An intimate encounter with these gentle giants could evoke a sense of delight and dread. When diving into the water surrounded by Orcas, they seem like dancing all around you like spotlights illuminating the night the darkness of the water.

Unlike Antarctica, there’s no land at the North Pole. Instead, it’s all ice that’s floating on top of the Arctic Ocean. When you stand upon the ice you are overwhelmed by its vastness, power, and sheer beauty. Surrounded by silence and cold wind, you will be able to walk on the footsteps of those legendary explores that embarked on incredible journeys to reach that northernmost point on earth.

An inaccessible dream that pushed countless explorers since the 19th century and inspired countless writers such as Marry Shelley who described in her masterpiece Frankenstein the North Pole with incredible accuracy as if she had travelled there. And this time, you could be the one standing there, on the northernmost point on earth.

Now, it is surely the moment to stop reading and instead, start planning your magical cruise to the Arctic Circle. A cruse lasting as many weeks as you like and tailored specially for you and your loved ones with all the details of Ariodante’s refined ultra-luxury travel experiences.

Request a Callback or send us a message so we can start planning on your own Arctic Cruise.

From Buckingham Palace to the World's best Household App

Travelling in the era of Covid-19